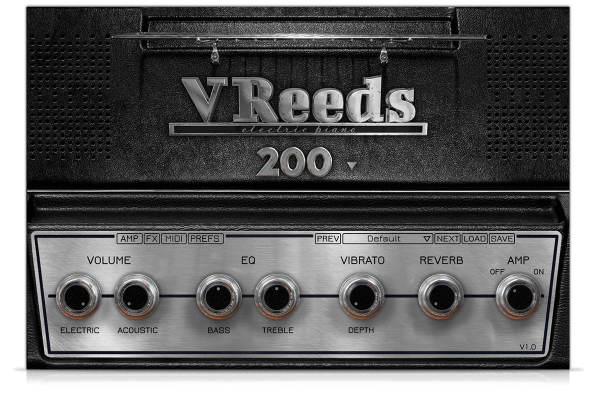 Qty:
Description Tech specs Copy protection User Reviews (0) User demos
SAMPLING MEETS MODELING
Just like for the VTines and the B-5 Organ, we combined synthesis techniques and sampling to achieve a high level of playability and tweaking while maintaining a realistic sound.
This allows the VReeds to weight only 70Mb and to really sound like a Wurlitzer© Electric Piano with all of its imperfections while having a fully continuous response (if you're not convinced, listen to the 127 velocity example in our video) as well as a highly tweakable sound.
There are a few Wurlitzer Electric Pianos, but the most famous ones are the 200 and the 200A. There are subtle differences between the two models mainly due to the thickness of the Reeds and the amplifier circuit. Instead of choosing one, we decided to sample the two models and offer you the choice from the interface.
The VReeds Electric Piano interface 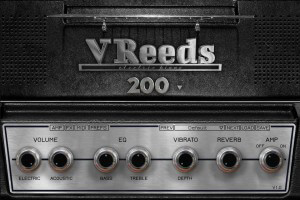 Main page with vibrato and reverb 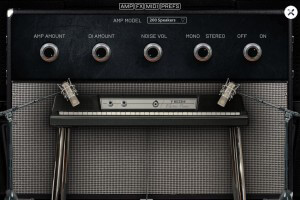 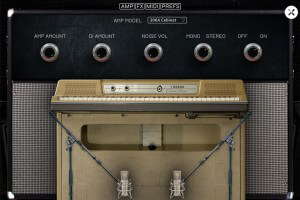 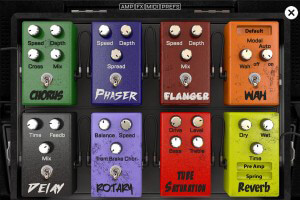 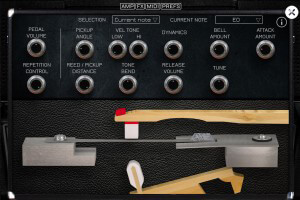 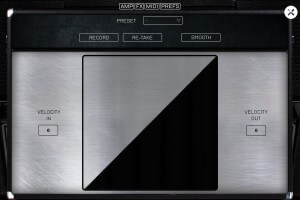 Pure Wurlitzer© sound, uncompromised playability
VReeds is based on real samples of two Wurlitzer models, a 200 and a 200A. They were both fully restored with original and well adjusted Reeds, and had a precise action that allowed for a perfect sampling while keeping all of the vintage Wurlitzer sound characteristics.
Our modeling method gives you access to a 100% continuous response, a very small sized library (70Mb for both models) and a very high tweakability.
It also ensures that the staccatos and releases that make up for half of the realism sound perfect, not like a fadeout, not too loud, just perfect.
more...

You can mix the acoustic signal (we had a mic pair right over the Wurlitzer capturing the real acoustic sounds of the keys and Reeds) and the DI Electric signal.

You can control a simple EQ with Treble and Bass.

The vibrato has two controls, the depth and the speed (just click on "Depth" to access the speed adjustment.  We carefully reproduced the shape of the original vibrato circuit. On the original 200, the vibrato rate is fixed, but there is a common mods on Wurlitzers that we included as well, plus we added a tempo link.

We added the very common reverb FX to the front panel. You can control its amount from here but if you want further adjustments, you need to go to the FX page.

You can also engage the AMP simulation from the front panel (you need to click on it just like on a button). Again for further adjustments, you need to use the AMP panel.

You can also use one of our presets from here as well as save and import yours.

The Wurlitzer sound is most of the time associated with the vibrato.

We carefully reproduced the shape of the original vibrato circuit. On the original 200, the vibrato rate is fixed, but just like the very common mod, we decided to extend the vibrato capabilities and add a rate control which can be linked to the tempo.

There is no EQ on the Wurlitzers, but it can be useful to just have one accessible quickly on the front interface. 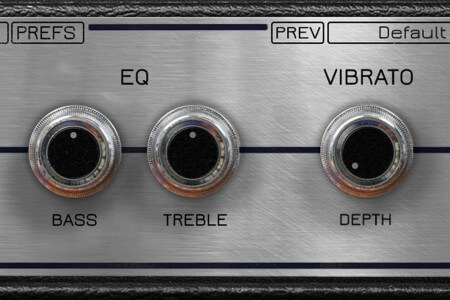 Speakers
Wurlitzers© can be recorded through the direct output, but also using its built in speakers.
On the 200 and 200A models, there are two small Speakers on each side of the front plate, on the 206 and 206A (beige models), there is a bigger speaker cabinet below the keyboard.
We captured both of these options and in both mono or stereo and we allow for a mix with the DI signal so that the VReeds fits perfectly in your mix.
more...

There are 4 amps to choose from: the 200 built in speakers, the 206A cabinet, a rhodes amp (taken from the VTines library) and a Twin Reverb amp.

These AMPs are noisy, and there is no way around it, so we added an AMP noise button so that you can get some noise from the VReeds as well.

As the Wurlitzer is sometimes recorded through the DI and through the amp as well, you can control both amounts as well.

FX Pedalboard
Wurlitzer© pianos are often used with FX, so we created an FX panel with the most common ones, each of them is one of the very efficient and high quality FXs made by UVI.
Each FX can be tweaked in real time. 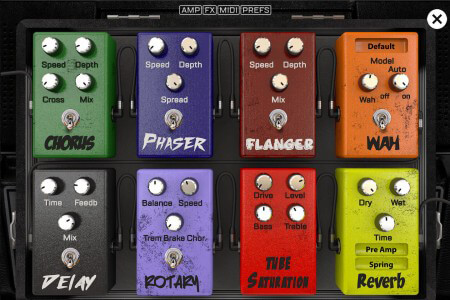 There are 8 FXs on the FX panel:

1- Chorus: based on Torus and you can control the Speed, Depth, Crossover and MIX of it.

2- Phaser: based on Phasor and you can control the speed, the depth and the Spread.

3- Flanger: based on Flanger and you can control the speed, depth and Mix.

4- Wah: based on the WahWah fx and you can use a few different models, have it on auto (by default) or control it using an expression pedal.

5- Delay: based on an Analog Tape delay and you can control the Time, the Feedback and the Mix.

6- Rotary: based on the Rptary effect we used in the B-5 Organ. You can control the Drum/Horn Balance, the Speed of the tremolo or set it to the 3 different speeds. When it's on, it will bypass the Suitcase AMP.

7- Saturation: based on the same Tube saturation used in the B-5 Organ, you can control the drive, the level and also the Bass and treble amount to somehow control which frequencies will be saturated. When set to 0, it is bypassed.

8- Reverb: based on the convolution reverb, you can use wether a String reverb, a plate reverb, or a real room ambience. You can control the time and the dry and wet parameters. Plus you can also use it before the amp like on a live session, or after as if you were adding it to a track in a sequencer. When set to 0, it is bypassed.

All of these fx come pre-amp except for the Reverb that can be set post-amp which can be useful if you want to make it sound like it is often set up on records.

Precise adjustments
Modeling also means customization, you can alter the sound of the VReeds like you would on a real electric piano and in a very easy way.
A real Wurlitzer electric piano can be customized by removing the top and with a simple nut driver, you can adjust the angle and distance between the reed and the pickup bar or bend the pickup bar to change the tone. It's exactly the same on the VReeds, you just don't need the nut driver.
You can adjust many different parameters for each note, for all notes or using a mapper for each parameter.
more...

On this panel, you can adjust many parameters to shape the sound of the VReeds. Here is what each parameter does.

There are only two parameters that are adjusted for the whole library:

2- The repetition control is an effect that happens only on pedal down. When you repeat the same note over and over again with the pedal pressed, the notes don't just stack up, but sometimes they get morte or less cancelled. We created an accurate model of this effect and were abel to reproduce it. That control will control the amount of that effect.

The rest of the parameters can be adjusted independantly for each note. By default the selection is set to current note, and any change on the parameters will only be applied to the most recently played note, but you can have it affect all notes, or you can select "note by note" to modify the parameters using a curve.

a- The pickup angle is the second component used on a real rhodes to voice it. The angle will completely change the tone and amount of overtone. Setting it very straight will give you the maximum overtone and bending it will lower the overtone.

c- Reed/Pickup Distance: The distance between the tine and the vibrating tine controls mostly the overall volume of the corresponding note. This, just like on a real one, will help voice the rhodes with more or less Bass and Treble at the note level. In reality, it also controls changes the angle made with the tip of the pickup so it influences the amount of bark and other parameters, but for the ease of use, we limited that knob action to just the volume.

e- The Tone Bend controls the overtone increase with the velocity. For example, if set at the minimum, there will be little overtone for most of the velocities and then quickly increase to the maximum overtone.
f- The Dynamics button controls the volume of the lowest velocity allowing for a greater or smaller dynamic range. It is set by default to the maximum range of the real instrument.
g- Bell amount: The Bell is mostly known for Rhodes pianos, but it also exists in the low range of the Wurlitzers, you can adjust how much of it there is in each note. Increasing it will also increase the attack as the Bell plays an important part in the attack of a Wurlitzer. You can compensate it with the attack knob if necessary.
h- Attack amount: You can control how much attack is present in the sound. This is independant from the Bell sound, so when you increase the bell, you might want to decrease the attack at the same time to compensate the increase.
i- Release Volume: The release is the the sound captured after the note is released. That characteristic noise has been carefully adjusted to sound exactly as the one of the original instrument, but you can control its volume.
j- Tune: Each note can be tuned separately.

MIDI Control
Every keyboard has its own MIDI response.
Our MIDI mapper allows to adjust the response of the VReeds velocity by velocity if necessary, and we created a tool that does it automatically by analysing what you play.
Just repeat a few linear velocity repetitions and it will be all set and ready to play. 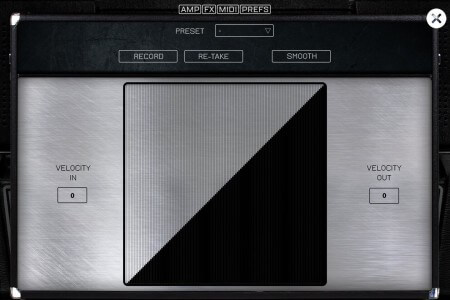 MIDI panel
We created a MIDI response mapper to allow you to adjust your keyboard response and have the VReeds respond just like you want.
If you know your keyboard response, you can draw it yourself and the smooth it out.
If you don't, you can use our automatic velocity detection. To use it, you can simply:
1- press record, then play a few velocities and try to be as linear as possible from the lowest velocity you can play to the highest that your keyboard can output,
2- then press record again and it will compute a compensated curve especially for your keyboard.
To refine the process, you can do a few different successive takes before hitting record again.

The distributed library is 70Mb compressed in lossless flac format (this includes two models: a 200 and a 200A, retina graphics and presets), the overall equivalent wav file size is about 315Mb.

iLok or computer based