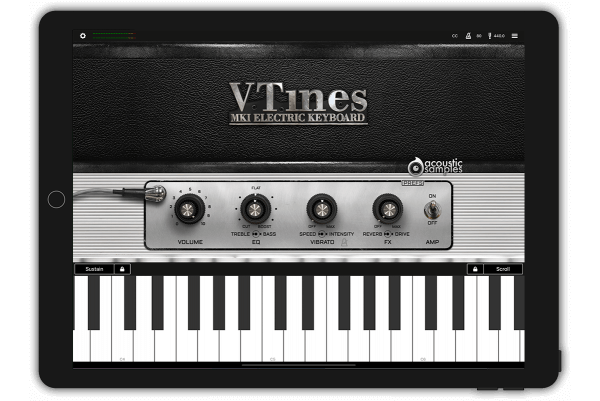 Qty:
Description Tech specs User Reviews (2) User demos
SAMPLING MEETS MODELING ON IOS
We have always had the idea that the future of virtual instruments was going to be the sound quality of sampling but with the playability of modeling. Getting both with only samples requires too many of them and only with modeling requires too much CPU.
We found a way to combine both technologies by using samples as the sound source and all the rest uses modeling techniques. This allows the V Tines to weight only 80Mb (retina graphics and presets included), to really sound like a Fender Rhodes© with all of its imperfections and to have a fully continuous response (if you're not convinced, listen to the 127 velocity example in our video) as well as a highly tweakable sound.
The VTines was limited to desktops for a while, but we were able to make it work on iOS, you can now take it with you everywhere, on your iPhone or iPad running iOS 11.0 or later.
The VTines LIVE is almost the same on iOS, the only differences are that it is not as tweakable as the desktop version, but the base engine is untouched and you still get the continuous response, the great suitcase simulation as well as the vintage stereo tremolo effect.
The « Live » version of our instruments has been especially thought for Live performance usage. CPU and RAM footprints have been optimized, so that our model can run on IOS devices. We paid a particular attention to making it easy to connect and use with external MIDI keyboards, and/or within you favorite AUv3 host
The VTines Live interface 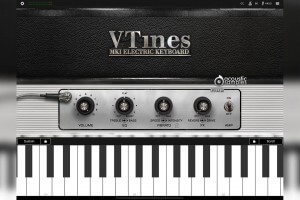 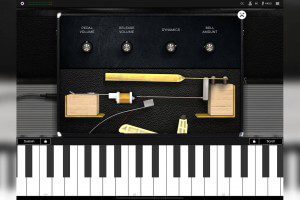 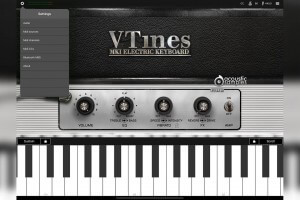 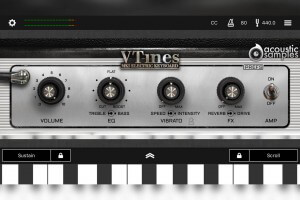 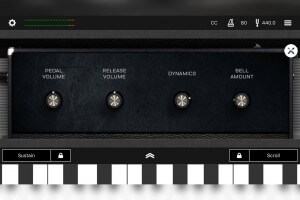 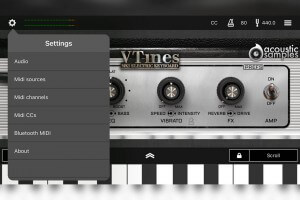 Pure Rhodes© sound, uncompromised playability
Our model is based on real samples of a 1978 Fender Rhodes© Mark1 fully restored with clean pickups and tines, new grommets, new hammer tips, etc, so it is the best an electric piano can sound.
Our model gives you access to a 100% continuous response, a very small sized app (86Mb) and a very high tweakability.
It also ensures that the staccatos and releases that make up for half of the realism sound perfect, not like a fadeout, not too loud, just perfect.
more...

You can adjust the overall volume of the VTines live.

The second concentric knobs, just like on a real suitcase rhodes control Treble and Bass. We measured this carefully and made sure the ranges and frequencies matched the original.

The vibrato (we talk about it more in depth below) has two controls, the depth and the speed. We carefully measured the output of the preamp and copied the real output of each channel. We also added a tempo link as it can be very useful. We also extended the original range as this is a common mod on real Rhodes.

There are two very common FX accessible on the front panel: reverb and drive. You can control their amount from here but if you want further adjustments, you need to go to the FX page.

You can also engage the AMP simulation from the front panel.

We carefully measured the output of the preamp of a Rhodes© suitcase and created an exact replica of the stereo panning of the Vibrato. We just added the possibility to sync it to your tempo and also extended the speed range just like some real mods do.

The Bass and treble EQ are precisely adjusted to the frequencies and ranges of the original preamp.

Pre 1969 Rhodes© only had a mono tremolo, so we added that option and you can get that old school vibrato effect. 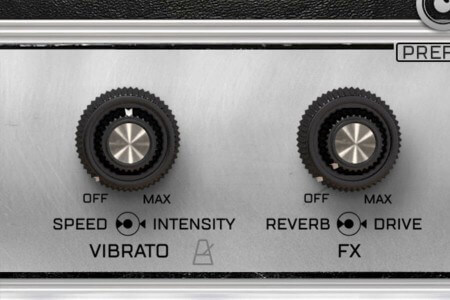 Suitcase AMP
Rhodes© are often recorded through the direct output, but the suitcase models have a stereo amp that has a very recognizable sound with two 12' speakers facing the front and two facing the back and each side.
Our AMP simulation is true stereo, meaning that we have a very precise stereo image which is extremely useful when the Vibrato is on. 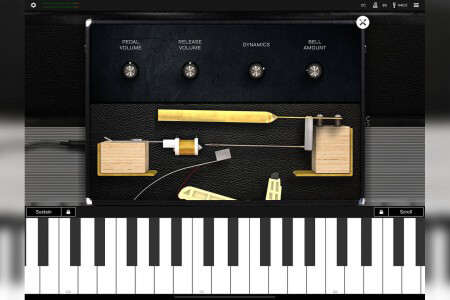 On this panel, you can adjust many parameters to shape the sound of the VTines LIVE. Here is what each parameter does.

2- The Dynamics button controls the volume of the lowest velocity allowing for a greater or smaller dynamic range. It is set by default to the maximum range of the real instrument.

3- Bell amount: The Bell is a known characteristic of the Rhodes pianos, you can adjust how much of it there is for all notes. Increasing it will also increase the attack as the Bell plays an important part in the attack of a Rhodes.
4- Release Volume: The release is the the sound captured after the note is released. That characteristic noise has been carefully adjusted to sound exactly as the one of the original instrument, but you can control its volume.

Requires an iPhone or iPad under at least iOS 11.0

App size once installed on your device:  43Mb

Works as standaloine and AUv3

By BrianK
Amazing for live use and I can't wait for more ios apps. The only complaint I have is that the low end is too sensitive and gets barky after only about 15% velocity.

By Adje
VTines Live for iOS: Nothing really comes that close to the real thing. Truly amazing..... small in size, big in sound; in short: "a must have" ! Gr.@dje (